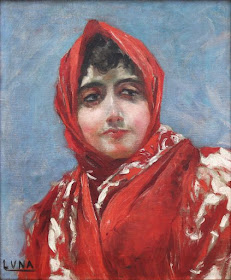 Outstanding star pieces once again grace the breathtaking lots at Leon Gallery’s upcoming Magnificent September Auction 2019 on 14 September, Saturday, at the Eurovilla I ground-floor salesrooms at Rufino corner Legazpi Streets, Legaspi Village, Makati, Metro Manila.
Headlining the fabulous lots is a rare portrait of a gypsy lady called“Una Chula” by Juan Luna. This vibrant portraiture represents Luna’s breaking from large academic and historical pieces to more personal and intimate works as he moves toward the more progressive faction of the Salon, or the Dissident One. By randomly picking anonymous subjects, he is able to highlight the spontaneous and, therefore, unfinished qualities that divert from the finesse of formal portraiture.
Such works are as personal one could get into Juan Luna’s mind. As art connoisseur Ramon Villegas once wrote, “These quick sketches…satisfy only his own standards, to see if what he saw in his mind was as pleasing as what his brush could paint, and what his eyes could see.” 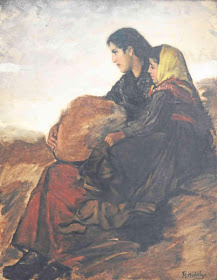 Top-billing with Luna’s tantalizing portrait of a “pretty young lady” is Felix Resurreccion Hidalgo’s evocative mother-and-daughter painting “The Country Women.” This valuable work is exemplary not only because it once belong to art patron Luis Araneta but more so, because it has been an important feature in Alfredo Roces’ scholarship on Hidalgo’s body of work. 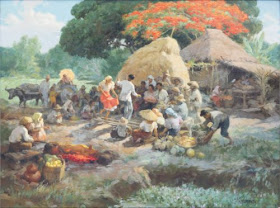 These quintessential masterpieces are joined by a sextet of Fernando Amorsolos spanning his illustrious career as a master of the Filipino psyche. Featured works by the first National Artist for the Visual Arts are “Barrio Fiesta/Untitled/Tinikling”, 1960; “Princess Urduja/Untitled”, c1945; “Farmer/Untitled”, 1945; “Lady with Banga”, 1940; “Portrait of A Girl/Untitled”, 1930; and “Sabungero”, 1929.
An interesting counterpoint is Andres Barrioquinto’s “Untitled” portrait of a contemporary lass. Posed formally and rendered in black and white like in standard portraits, the girl is surprisingly bedecked with an effusion of tropical blooms and butterflies characteristic of the Barrioquinto’s trademark style.
Currently on a respite from doing commissioned portraits, Barrioquinto’s work is a piece de resistance for collectors who marvel at the hallucinatory balancing of good and evil in the auction star’s Zen-inspired stylized vintage hyperrealism.
Another contemporary master of stylized portraiture is Jason Montinola, whose “Silent Verse Against Trinity” is a haunting reimagining of a sepia portrait that has turned dramatically surreal. Regarded as a master of deception, Montinola digs deep into the unconscious for his visual language to tie up and project the fixedness of the past to the otherworldliness of the future.
National Artist for Visual Arts BenCab’s take on the connectivity of past and present is his “Untitled” depiction of a sepia peddler, which is a powerful metaphor for survival against poverty. Recognized as one of the pioneers in realistic subject treatment, BenCab is known for his use not only of a perspective critical of class distinctions but also of old, brown and, therefore, nostalgic photographs that critique the present.
Dynamic oeuvres up for auction include Arturo Luz’s “Desert Moon, Rajasthan,” from his Cities of the Past Series; MauroMalang Santos’ “Four Women” and “Untitled”; Romulo Galicano’s “Blue Mood” and “Morning at Monet’s Garden”; Romulo Olazo’s “Untitled” from his Untitled Series; and, Vicente Manansala’s “Nude”.
- Advertisement (300x250) -

Then there are two exquisite geometric sculptures by Eduardo Castrillo, the artist behind the monuments of Bonifacio, Rajah Sulayman, and the People Power in Metro Manila, who ushered in a renaissance in Philippine sculpture. These two paradoxically simple yet labyrinthine pieces wrought in iron represent the master sculptor’s control over the craft of blacksmithing and the art of sculpture.

The Rizal Tampipi
The preview of The Magnificent September Auction 2018 shall run from September 7 to 13, 2019, Saturday to Friday—with cocktails on September 11, Sunday—at León Gallery located in Eurovilla I, Legaspi Street corner Rufino Street, Legazpi Village, Makati City. For more information, visitwww.leon-gallery.com, call +632 8562781 or email us at info@leon-gallery.com. 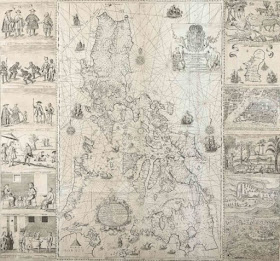