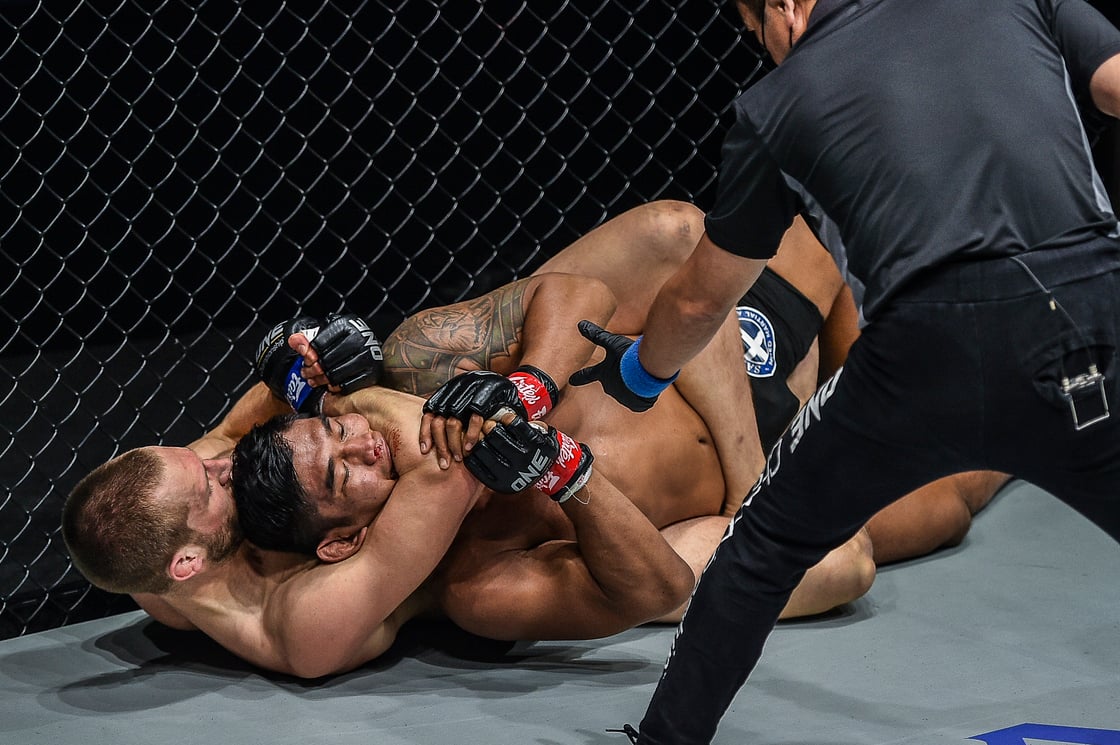 In the main event, The Netherlands’ Reinier “The Dutch Knight” De Ridder shocked the world, submitting now former titleholder “The Burmese Python” Aung La N Sang of Myanmar in the first round. Aung La opened up the action with a fast uppercut that just missed the mark. De Ridder countered with a quick shot from range, taking “The Burmese Python” down to the mat. A swift transition to the back secured with a body triangle offered De Ridder plenty of opportunities to work for the finish with most of the round to go. After several attempts, a rear-naked choke was in deep, and Aung La had no choice but to tap out.

In the end, De Ridder stayed true to his word, choking out Aung La early to capture the ONE World Title. With the victory, De Ridder kept his unblemished record, taking home the ONE Middleweight World Title in the process.

Visit the official ONE: INSIDE THE MATRIX photo gallery by clicking: https://bit.ly/onephotos

Reigning ONE Lightweight World Champion Christian “The Warrior” Lee of Singapore made quick work of the previously-unbeaten Iuri Lapicus of Moldova, winning via first round technical knockout. At the sound of the opening bell, Lee dashed across the Circle, shooting in for a double leg. Lapicus was able to reverse the takedown and land in top position. Lee worked to make his way back up to the feet, taking down Lapicus himself and landing in full mount. Lapicus tried to scramble, but Lee showed immense control on the mat. From there, “The Warrior” connected on a series of hammer fist blows that rendered Lapicus defenseless. The referee had no choice but to step in and call a halt to the contest.

Vietnamese-American knockout artist Thanh Le authored a scintillating knockout of now former titleholder Martin “The Situ-Asian” Nguyen of Australia and Vietnam, capturing the ONE Featherweight World Championship. Le employed a smart game plan, circling Nguyen with constant movement while unloading thudding high kicks and thunderous left hooks. Nguyen stalked Le patiently, attempting to cut off the Circle to land his vaunted overhand right. In the third round, Nguyen turned up the pressure, at the same time exposing himself to Le’s fast and furious strikes. Not long after, Le connected on a short hook on the inside that staggered “The Situ-Asian,” sending him reeling towards the fence. A series of left and right hand bombs ended the bout abruptly, and Le walked away with the most significant finish of his career.

China’s “The Panda” Xiong Jing Nan retained her ONE Women’s Strawweight World Championship, turning in a virtuoso performance against Singapore’s Tiffany “No Chill” Teo, winning by close unanimous decision in a highly-anticipated rematch. Xiong peppered Teo with beautiful boxing combinations from start to end, proving the faster, more powerful puncher. Teo had her moments, scoring on a few takedowns, and connecting on a series of sharp knees and roundhouse kicks. But Xiong was far too forceful on the feet, and Teo just could not overcome the pressure. In the end, all three judges scored the bout in favor of Xiong Jing Nan.

Australia’s Antonio “The Spartan” Caruso notched the biggest victory of his career so far, as he took home a hard-earned unanimous decision victory over former ONE Lightweight World Champion Eduard “Landslide” Folayang of the Philippines. Caruso started off the bout strong, sticking multiple takedowns and attacking with various submission attempts in the first two rounds. Folayang, however, came alive in the third behind a steady leg kick game that had Caruso immobilized. In the end, all three judges scored the bout in favor of Caruso.

Kicking off the action at ONE: INSIDE THE MATRIX, Indian wrestling champion Ritu “The Indian Tigress” Phogat put together an impressive victory over Cambodia’s Nou Srey Pov, winning by technical knockout in the second round. Phogat dominated the first round, landing multiple takedowns while doing damage on the ground in dominant position. Phogat landed a pair of solid right hands before taking Nou down to the ground again in the second, where she finished in top position with strikes.

ONE Championship returns with ONE: INSIDE THE MATRIX II, a previously-recorded event for global broadcast on Friday, 6 November. In the main event, reigning ONE Welterweight World Champion Kiamrian “Brazen” Abbasov of Kyrgyzstan defends his world title against undefeated James Nakashima of the United States. Also on the card is a lightweight showdown between top contenders Timofey Nastyukhin of Russia and Pieter “The Archangel” Buist of The Netherlands.

Official results for ONE: INSIDE THE MATRIX