ONE Championship Announces Return to Singapore

with ONE: REIGN OF DYNASTIES on 9 October 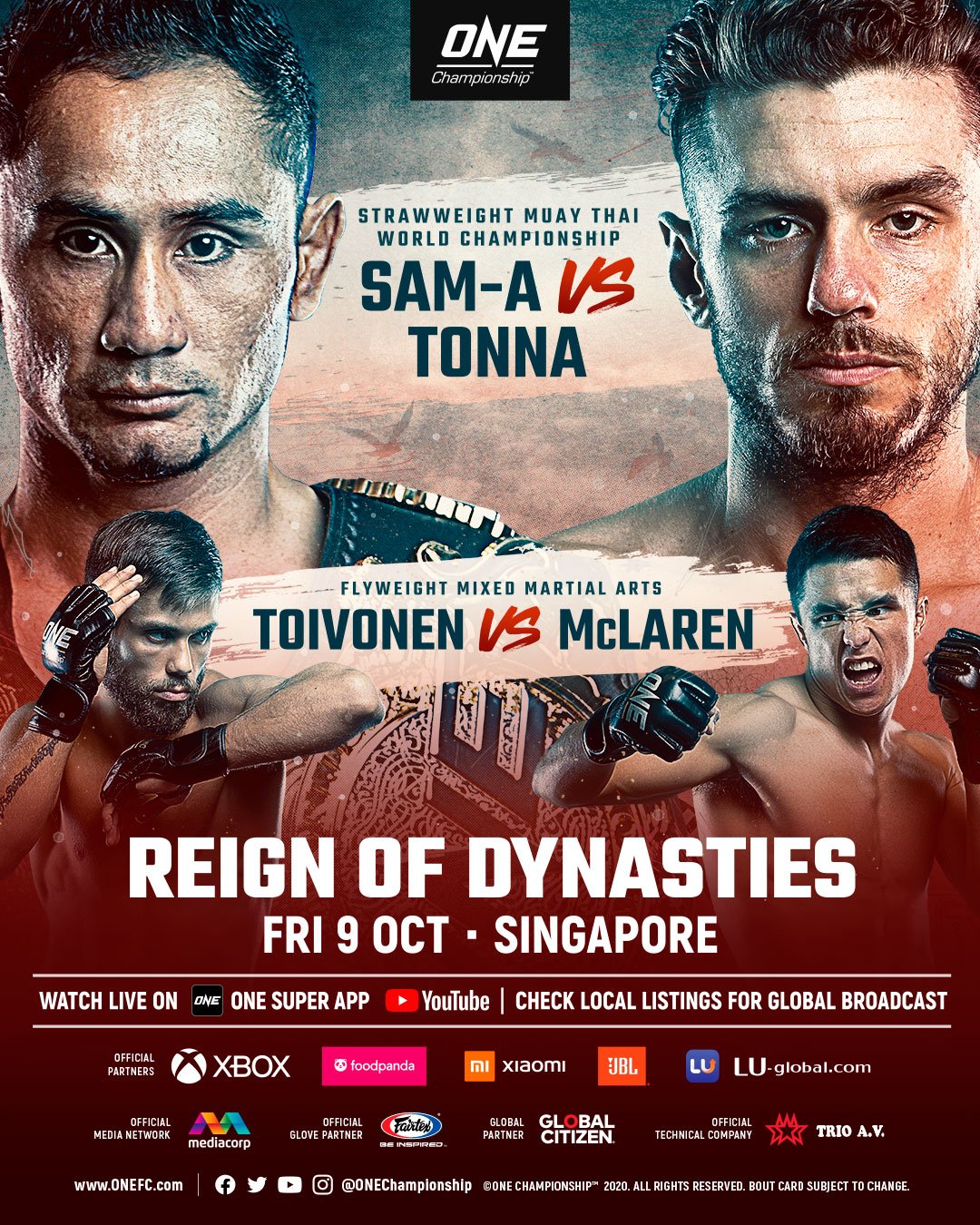 5 October 2020 – Singapore: The largest global sports media property in Asian history, ONE Championship™ (ONE), today announced its return to Singapore with ONE: REIGN OF DYNASTIES, to be broadcast live on Friday, 9 October.

ONE: REIGN OF DYNASTIES will be the first international sports production pilot to take place in Singapore since the country’s implementation of Covid-19 related measures earlier this year and will feature six bouts involving local and international athletes. All bouts will take place audience-free and behind closed doors at the Singapore Indoor Stadium, with only athletes, officials, and crew onsite. All the action can be enjoyed on ONE Championship’s official ONE Super App, ONE’s social media channels, locally in Singapore on MediaCorp’s Channel 5 and meWATCH app, as well as globally across ONE Championship’s broadcast and digital media partner’s properties. For more information, go to https://www.onefc.com/news/how-to-watch-one-reign-of-dynasties/

In line with Singapore’s approac to resuming activities in a calibrated and safe manner, ONE: REIGN OF DYNASTIES will implement all necessary measures to ensure the safety of its athletes, officials, and crew.

Hua Fung Teh, Group President of ONE Championship, stated: “We are honored that ONE Championship has been entrusted by the Singapore Government to pilot the return of international sports events for broadcast from Singapore. We are thrilled to be able to bring our local and international heroes back to the Singapore Indoor Stadium to inspire martial arts fans in Singapore and around the world with their inspiring combination of heart, hard work, and talent.”

Ms. Ong Ling Lee, Director, Sports, Singapore Tourism Board, stated: “We are pleased to work with ONE Championship to bring ONE: REIGN OF DYNASTIES to Singapore. Together, we will test-bed appropriate safe management measures in this important production pilot that could pave the way for sports events to take place in the future.”

Sam-A Gaiyanghadao, ONE Strawweight Muay Thai World Champion, stated: “I’ve been working hard over the last few months, honing my skills further as the competition intensifies. Everyone wants a piece of the champion, and there are many great challengers out there. This break has really allowed me to focus on myself and re-energize. I’m ready to get back into the Circle and defend my World Title. Josh Tonna is a hungry young warrior, and I know he will be in the best condition possible for this fight. I’m coming in with my best too. For my fans, the pride of Thailand, and my team at Evolve MMA, I will beat Tonna and remain champion.”

Josh Tonna, ONE World Title challenger, stated: “I would first like to thank ONE Championship for the opportunity to compete for the ONE World Title. It is an honor for me to face such a huge name in Muay Thai, the legendary Sam-A Gaiyanghadao. This is without a doubt the biggest fight of my career. I know I’m heading into this fight as the underdog, but I’ve been in this position before. Not many people are giving me a chance to win. But I perform the best when people doubt me. I will do everything in my power to walk out of the arena with the ONE World Title around my waist.”

Complete ONE: REIGN OF DYNASTIES Final Weight and Hydration Results