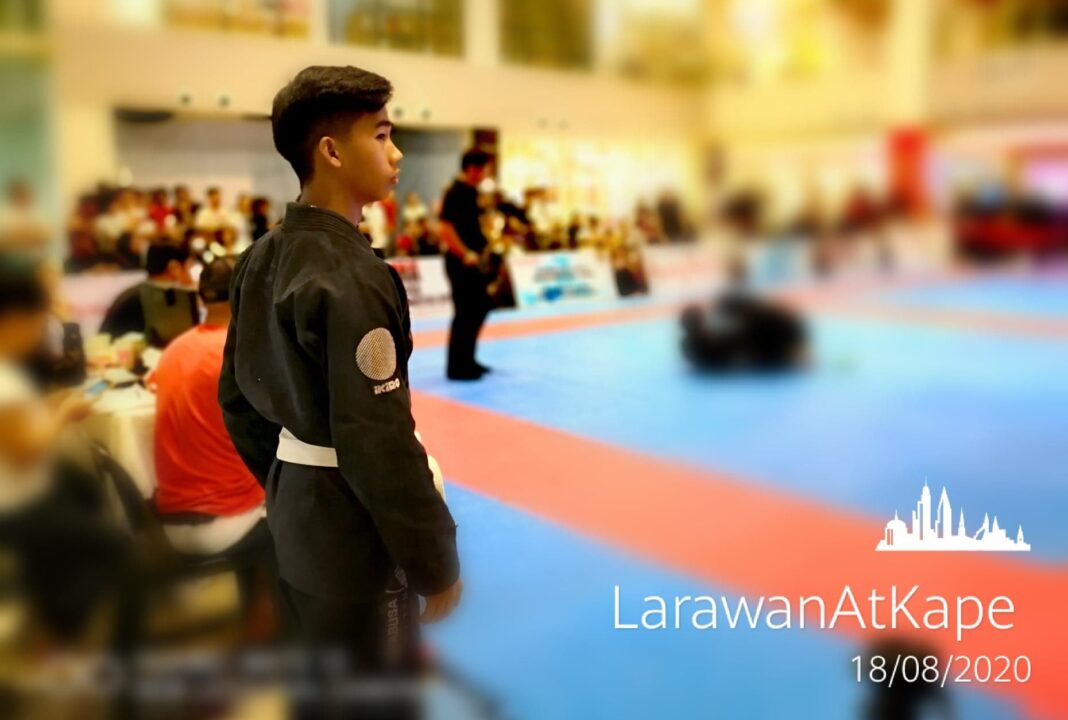 John Carlo B Cueto, 18, was born to blogger-entrepreneur John Cueto and school head Bless Cueto on December 22, 2001. A graduate of Manila Science High School with honors, he belongs to the Top 10 of his class and a recipient of an Outstanding Star Award. He’s currently Master Councilor of the General Douglas MacArthur Chapter of the Order of DeMolay.

He started Wushu when he was 5 years old, learned kickboxing mixed martial arts at MTFC, and did Muay Thai training in Thailand before winning Bronze in the Philippine Jiu-Jitsu National Gi Championship last 2019.

Read on to get a drift of how a youth achiever both in school and in sports thinks, has learned about life from his experiences and his coach, and plans to achieve as an award-winning Jiu-Jitsu martial artist.

Would you consider winning bronze in the Philippine National your biggest win so far? Why?

“As an athlete, I always aim for the best and train to be one of the best. Defeat is part of the game but it is also a building block to establish a great foundation for a great victory. I am still thankful for receiving Bronze in my division.”

How important is this tournament in your career as a martial artist/ How would your win here contribute to your long-term goals?

“Every tournament that a martial artist joins is a test. Here your training will be assessed and tested. As a martial artist, you’d always like the outcome to be great, after all, you’ve worked hard and trained for it. Every win counts and has a great impact on your morale and sportsmanship. Every loss defines what you need to improve on and enhance.”

What are your long-term goals as an athlete? What specific steps do you plan to take to achieve this goal?

“My long-term goal as an athlete is to develop the right character such as being disciplined and respectful, never underestimating other people, and most importantly being grateful to your teachers and coaches. I plan to achieve this by training in the right gym and training with the right people.”

What contributed to your winning the game? What factors came into play? How did you prepare yourself for this?

“A big factor in my success and victories are my coaches. Without the guidance and teachings they’ve imparted to us, we might not have reached this far. To prepare for a competition, we make sure that we roll hard on training and focus on our movements. We observe our opponents and read their game plans to make them advantageous to our success.”

How many years have you been doing martial arts? Could you give me an overview of your career?

“I’ve been training Jiu-Jitsu for almost two years already. In those two years, I was only able to cover half of the months I was supposed to train. But before I went to Jiu-Jitsu, I had trained for Wushu from Grade 1 to Grade 5 at MTM, then I transferred to the Wushu Federation until Grade 8. In between Wushu and Jiu-Jitsu, I took training sessions in Muay Thai.”

Do you play for a gym, a team, or a school or do you play independently? How was your experience so far?

“Whenever I compete, I always represent MDS Jiu-Jitsu Manila. The people who train there are all approachable, friendly, and easy to tag along with.”

What were the most important lessons you have learned from your coach/team leader? How hard was it to put into action?

“Professor Myron always tells us to focus and never hesitate whenever we plan to make a move. It is a hard thing to do sometimes because I’m afraid to be caught off guard while initiating my move.”

How did your parents influence your decision to become a full-fledged athlete?

“My parents are also inclined to martial arts during their early years which also gave me the motivation to try different kinds of martial arts. Sometimes they hate it when I go home injured, but they still support me because it is what makes me active and happy and it is what I am good at.”

What made you choose martial arts over other sports?

“Martial arts is not about fighting. It is about something more and something bigger. Martial arts teaches us so many lessons that can help us in the future. It teaches us to defend rather than to start a fight. It makes us humble and patient.”

What are your three wishes as a martial artist?

“I wish that I will always be safe and far from injuries, that victory will still keep me humble, and that a great future awaits our coaches.”

What message do you have for younger martial artists and aspiring athletes?

“To all young athletes, always remember that martial arts is a sport and not a form of violence. Keep in mind to thank everyone involved in your growth.”

What’s your motto in life?

Coach Myron Miles Mangubat was promoted as a black belt by DEFTAC and is known to be one of the youngest and fastest black belt earners in the Philippines. He is currently running two Jiu-Jitsu gyms, one in Angeles and another in Manila—MDS Jiu-Jitsu Manila. He competed at ADCC several times and is also part of the Philippine Team. Prof Myron, as he is fondly called by students, is not only bound to Jiu-Jitsu but is also to MMA.

Can you give us a short background of the tournament?

“The competition started in 2010. This is the competition for all white belts with less experience and first-time competitors. This is where you can measure and see the potential of your students..”

What’s your evaluation of JC and his competitors as martial artists?

“JC has extensive potential for becoming a great competitor. He has grit. He is hardworking and always hungry to learn!

“Though he’s been training with us inconsistently because of school for over a year now, still, he was able to put up a good match against someone older and has way more experience than him in fighting.

“I guess if he put on a little more mat time, he could get that gold medal and could be one of the future greats of Philippine Jiu-Jitsu!”

How important is this match in your career as a coach?

“This is where I sum up the abilities of my students. This is when I see their strengths and weaknesses. This is where I observe and distinguish what techniques work for them and how we can improve their game for the next competition.”

How long have you been coaching and what were your greatest achievements?

“I started Jiu-Jitsu in 2009 but only started teaching last 2014. I became a part of the Philippine National Jiu-Jitsu Team last year and fought several matches of MMA, too.

“The best alumna/student that I was able to produce so far was Kimberly Custodio, a World medalist, winner of major international and local tournaments, and an active competitor of the Philippine Jiu-Jitsu Team.”

What were your three toughest must-do rules?

What message do you have for aspiring martial artists to win and succeed?

“No excuses, no shortcuts, JUST TRAIN.”

It started when I was a purple belt and I had to move to Manila. The old place where I used to train was too far from where I lived and I was really eager to train so I started teaching my family and friends to I have people to spar with. It’s all for the love of sport. Years pass and my team “MDS Jiu Jitsu grew bigger. From 1 student, it grew up to a 100 students. From 1 gym, it propagates to 3 chapters. Taft, Angeles Pampanga and Binondo. And will soon be joining a new venture in opening the biggest and the best BJJ gym in Philippines at the heart of Makati along with the biggest names in Philippine Jiujitsu. Seeing my students potential and watching them mature, achieve their goals in fitness and win major local and international competitions motivates me to continue teaching and share the art..

Happy Papa’s Day to all daddies out there! Here are some clips to remind you How awesome it is to be training with your younglings! 1. Instant training partner2. You have a number one fan kahit hindi ka masyadong magaling! Ikaw parin Idol niya, SURE 😆3. Automatic TAGA PAYPAY during breaks!!! 😆😄😄😄Keep safe and see you again SOON!!Myron Myles Mangubat Jacqueline Chang

MDS Manila can be view from their facebook page; https://www.facebook.com/Mdsjiujitsu/