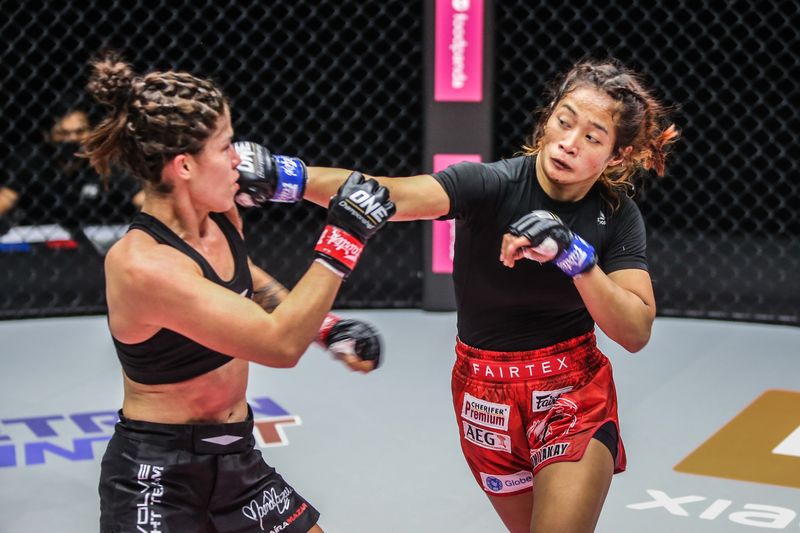 Share Tweet
Gina Iniong happy to see Jenelyn Olsim make her own name in ONE
MUCH has been said about the new breed of Team Lakay fighters as the likes of Lito “Thunder Kid” Adiwang, Stephen “The Sniper” Loman, Jeremy “The Juggernaut” Pacatiw, and Jhanlo Mark Sangiao have all garnered hype upon their arrival in ONE Championship.
But make no mistake about it, that excitement isn’t limited to the legendary stable’s male competitors.
Jenelyn Olsim is also hoisting the flag for the women in the Baguio-based gym as she seeks to make her own splash in The Home of Martial Arts.
And she’s got a veteran backing her up in this ascent.
Gina “Conviction” Iniong is elated to see how Olsim has fared since her arrival in ONE Championship, establishing herself as one of the fiercest female fighters in the promotion.
“Jenelyn has been showing great promise since she competed in ONE Championship. She won [her debut] in dominant fashion and I think at the rate she’s fighting now, we can see her challenging for a belt soon,” she said.
Iniong is just overjoyed to witness this campaign for Olsim, especially seeing how far the latter has gone in her career.
“I can remember the first time I saw Jenelyn in the Team Lakay Gym and all I saw was a very hardworking and talented fighter. She listens to the coaches, and she absorbs everything in our training,” she recounted.
“She just takes in all that information very well and understands the pointers that were given to her, and she really uses it to her advantage to get further and get better in her career.”
- Advertisement -

In Iniong’s eyes, Olsim’s campaign in the 30th Southeast Asian Games back in 2019 may have also boosted her confidence as she became one of the few Team Lakay medalists in the regional multi-sport event after taking home a silver medal in the women’s 54kg in muay thai.
“We were in different training camps, but because we’re both in Team Lakay, the connection will always be there. She is still a family to me even if we were in different disciplines in the SEA Games,” said Iniong, who for her part won the gold medal in the women’s lightweight category in kickboxing.
Truly, Olsim has enjoyed a supernova-like ascent after her run in the ONE Warrior Series.
In her first match, the 24-year-old turned heads as she stunned no. 5-ranked strawweight contender Maira Mazar with a submission victory at ONE: FISTS OF FURY 3 last March.
Showcasing her grit and the much talked about improved ground game from Team Lakay, Olsim caught Mazar to a guillotine choke and forced the Brazilian to submit 41 seconds into the third round.
It was a captivating victory that allowed Olsim to take Mazar’s place in the ONE Athlete Rankings for the women’s strawweight division.
But now, Olsim is making a move from the strawweight division to the atomweight division as she fights the always dangerous Bi “Killer Bee” Nguyen at ONE: BATTLEGROUND III on August 27 in Singapore.
Despite the changes in weight, Iniong has her full belief that Olsim can maintain her lethal kicks and equally improved ground game to get the victory.
“Jenelyn is a well rounded fighter. She has a great ground game and at the same time, she is also a muay thai fighter. Given this background, she can be creative inside the ring and adapt easily to the situation,” she said.
Iniong, who also competes in ONE Championship’s atomweight division, has also done her part in preparing Olsim for this leap, giving her insightful advice ahead of her fight against Nguyen.
“I just told her to play her game, stick to her plan, and trust herself. She has a great team and an amazing talent and skill set, and all she needs is to trust that and everything she worked hard for will all manifest inside the ONE Circle,” she said.
Who knows, another statement win from Olsim in this match may just very well put her in another opportune situation in this new weight class, possibly a match against reigning ONE Women’s Atomweight World Champion “Unstoppable” Angela Lee — one Iniong is happy to vouch for.

“If Jenelyn continues to keep winning in the atomweight division, I think she can be a strong title contender,” she said.