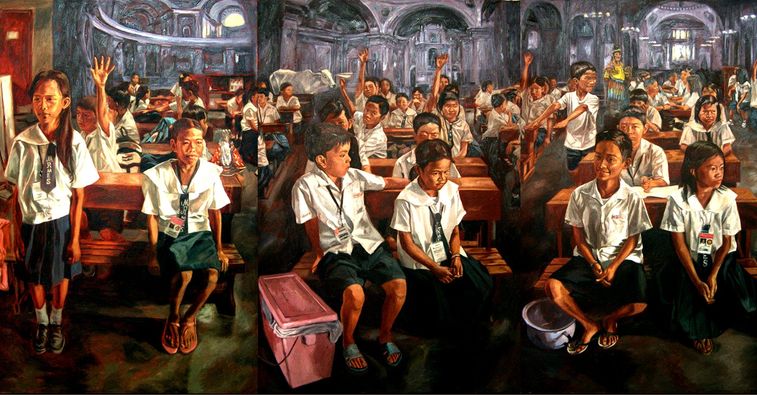 Philippine history is replete with stories of valor and courage, with a hero defending the honor of his family, village, nation and countrymen. A country often builds its identity on the backs of the narratives it constructs around their heroes.

Artist Juanito Torres (b. 1977) has built his practice around the “mythologizing” aspects of Philippine nation-building. His paintings parse out the truths from the constructed “histories” we are taught in school and lace them with a scathing awareness of how the efforts of historians, screenwriters, politicians, and the masses have appropriated, re-appropriated, and recycled Philippine heroes for whatever purposes they may serve. In this manner, his practice serves to stimulate the recent interest in history.

Indeed, Torres’ practice is a vital component in fleshing out what it truly means to be Filipino. Juanito Torres will be having a one-man show entitled “The New Reality: Truth is Stranger than Fiction” will open on October 21 and run until October 31, 2020 at Galerie Joaquin at the UP Town Center in Diliman, Quezon City.

Haunting, surreal, and technically astute, the new works that will be exhibited in his upcoming show, “Frontliners and Superheroes,” are an invaluable visual entry point into Philippine reality, history, culture, and society.

How does a nation find itself? The most obvious answer is that it finds meaning in its identity – and this identity is derived from a shared history and reality. The Philippines is, in many ways, an artificial nation whose boundaries were drawn by colonizers in the Age of Discovery. As a people then, Filipinos have always been bound by a sense of justice that came with independence and freedom. By shedding the mantle of servitude to a far-away state, we cease becoming their subjects and stand as our own people, with our own identity as a nation.

This narrative is seemingly straightforward, with the antagonist being the colonizers or the Covid 19 virus which would deprive us of our place as a free nation. But the tragedy of the Philippines is that our history is peppered with stories of unknown enemies and Filipinos fighting Filipinos to the benefit of our external enemies.

What drives artist Juanito Torres, then, is the need for Filipinos to confront their past and face their present realities. His paintings reveal the artist’s search for the truth behind the story of the Philippine nation, and in the process we discover new realities about ourselves. Torres uses historical events as springboards to parse out the truths from the constructed “histories” we are taught in school.

He then injects surrealist imagery and aesthetics to emphasize the mythologies Filipinos have built around the history, and laces them with a scathing awareness of how the efforts of historians, screenwriters, politicians, and the masses have appropriated, re-appropriated, and recycled Philippine heroes for whatever purposes they may serve, Juanito Torres’ paintings become the meta-narratives in defining what it means to be a Filipino.

What Torres found was the tendency to mythologize aspects of history as explanation to modern perceptions, behaviors, and beliefs. Through this, he realized that Philippine history revolves around us and touches our lives in ways that we often take for granted. He also realized that we build our present-day heroes according to what we require and need.

I like this painting for my blog www.larawanatkape.net, this is the new normal of our lifestyle.