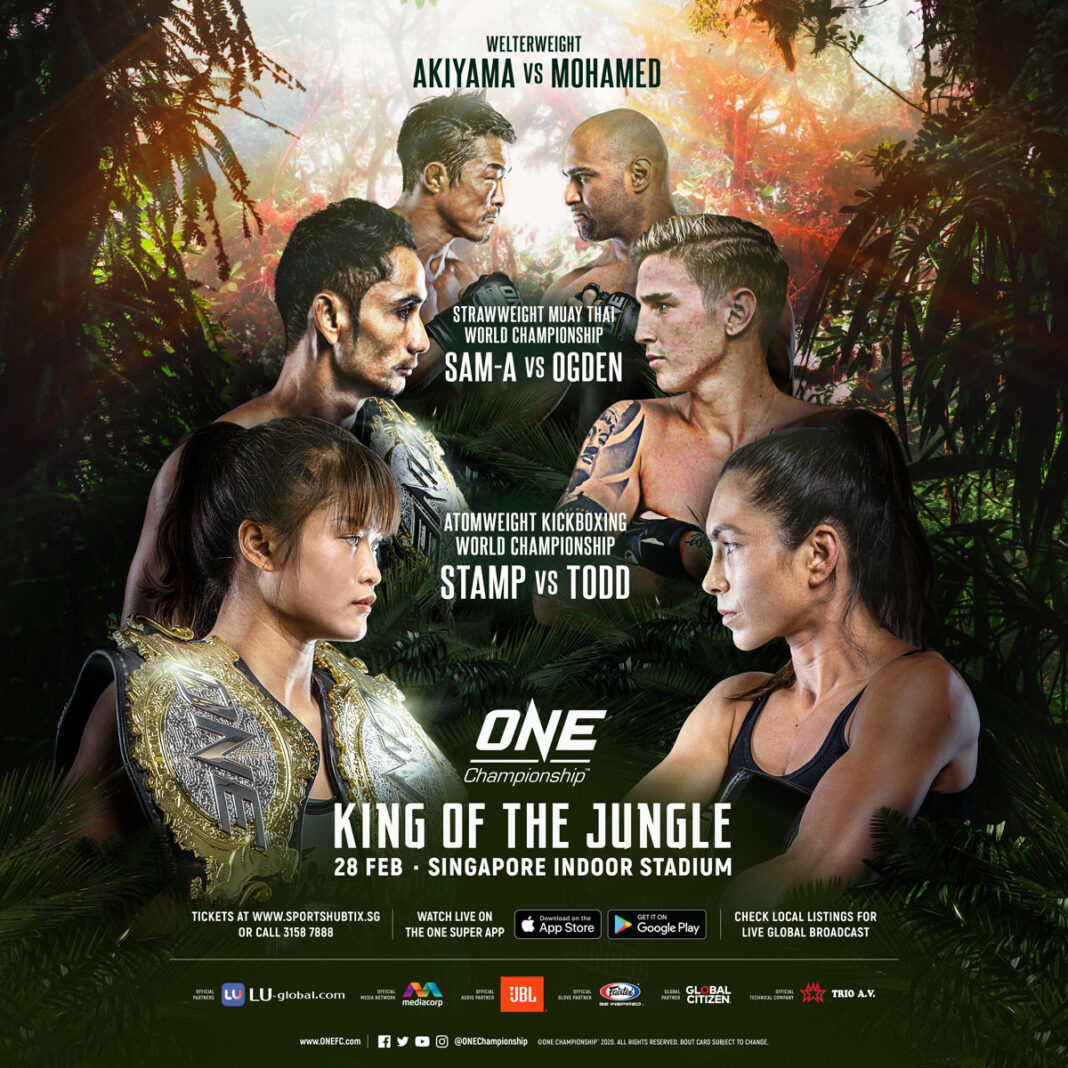 COMPLETE CARD ANNOUNCED FOR ONE: KING OF THE JUNGLE ON 28 FEBRUARY

17 January 2020 – Singapore: The largest global sports media property in Asian history, ONE Championship™ (ONE), returns to the Singapore Indoor Stadium on Friday, 28 February for ONE: KING OF THE JUNGLE, set to showcase the absolute best in world-class martial arts talent.

In the main event, two-sport ONE World Champion Stamp Fairtex of Thailand is scheduled to defend her ONE Atomweight Kickboxing World Title against Janet “J.T.” Todd of the United States.

Stamp returns to ONE Super Series action to defend her ONE Atomweight Kickboxing World Title. After going 4-0 in mixed martial arts competition thus far, the 22-year-old phenom has taken the world by storm, captivating audiences across the globe with her striking prowess and unmistakable charm.

Stamp was most recently in action at ONE: A NEW TOMORROW at home in Bangkok, where she finished Puja Tomar via first-round technical knockout. Now she makes the quick turnaround to defend one of her prestigious belts.

Todd, a two-time Pan-American Muay Thai Champion, challenged Stamp in early 2019 for the inaugural ONE Atomweight Muay Thai World Championship, but ultimately fell short of victory after five close rounds. Despite the setback, Todd remains Stamp’s toughest test to date. The two now look to reprise their epic battle, this time with the ONE Atomweight Kickboxing World Championship on the line.

In the co-main event of the evening, reigning ONE Strawweight Kickboxing World Champion Sam-A Gaiyanghadao of Thailand will take on Rocky Ogden of Australia for the ONE Strawweight Muay Thai World Title.

Sam-A was spectacular in his most recent bout, a unanimous decision nod over Wang Junguang last December. Recognized as one of the most accomplished Muay Thai competitors of all time, Sam-A has put together a stellar professional career spanning more than 400 bouts. He has captured Muay Thai World Titles across several weight classes. He joined ONE Super Series in 2018, and not long after became the inaugural ONE Flyweight Muay Thai World Champion. Although he would surrender that title, he would capture the ONE Strawweight Kickboxing World Title in his most recent contest. Sam-A now attempts to capture a another belt, the ONE Strawweight Muay Thai World Championship, when he goes against ONE Super Series newcomer Ogden, a WPMF Bantamweight World Champion.

In a lightweight contest, former ONE World Title challenger Amir Khan of Singapore will take on ONE Warrior Series contract winner Kimihiro Eto of Japan.

Khan, a Singaporean Muay Thai champion, has faced the biggest names in ONE Championship, including former ONE Lightweight World Champion Eduard Folayang and former ONE Featherweight World Champion Honorio Banario. Eto, on the other hand, is a national Greco-Roman and Freestyle wrestling champion who has a penchant for notching impressive submissions.

Veteran Yoshihiro “Sexyama” Akiyama of Japan and Korea returns to action against Sherif “The Shark” Mohamed of Egypt in a welterweight mixed martial arts contest. Akiyama seeks his first victory on the ONE Championship global stage against a seasoned opponent, while Mohamed looks to get back to the winner’s circle by downing a legend.

Top women’s atomweight and former ONE World Title challenger Mei “V.V” Yamaguchi of Japan continues her march to the top of the weight class, this time by facing formidable Chinese adversary, Meng Bo. Yamaguchi is known for her well-rounded striking and grappling skills, as well as veteran experience. She has faced the biggest names in her division throughout her career, which includes challenging Angela Lee twice for the atomweight belt. Meng, meanwhile, is a winner of her last four bouts, three of which have come inside the distance.

Former ONE Featherweight World Champion Honorio “The Rock” Banario of the Philippines battles Thai superstar Shannon “OneShin” Wiratchai in a featherweight contest. Both Banario and Wiratchai are looking for statement-making wins to kick-start their year, but only one man will leave the ONE Circle with their hands raised in victory.

Fan-favorite and former ONE World Title challenger Tiffany “No Chill” Teo of Singapore makes her highly-anticipated return to action against dangerous grappler Ayaka Miura of Japan. Teo’s most recent outing saw her claim victory over Brazilian Jiu-Jitsu world champion Michelle Nicolini. Miura, conversely, is coming off a scintillating performance against Maira Mazar earlier this month. Teo certainly knows how to deal with grapplers, but Miura is riding a wave of momentum into this contest that may prove tough to overcome.

Indian wrestling sensation Ritu “The Indian Tigress” Phogat goes for two-in-a-row in her budding mixed martial arts career when she locks horns with China’s Wu Chiao Chen. Phogat sizzled in her ONE Championship debut late last year, when she finished Nam Hee Kim in the first round by technical knockout. Phogat will need to be at the top of her game against Wu, who is looking to make an impact in her ONE Championship debut.

In a ONE Super Series kickboxing contest, WFKO Kyokushin Karate World Champion Hiroki Akimoto of Japan faces OneSongchai R1 Champion Azwan Che Wil of Malaysia. Representing Evolve MMA in Singapore, Akimoto is coming off a thrilling victory over Kenny Tse last year, showcasing his toughness and aggressive striking style. He will need every bit of power he can muster if he wants to stop his determined Malaysian foe.

Lastly, ONE Strawweight Indonesian Tournament Champion Adrian “The Papua Badboy” Mattheis of Indonesia aims to bounce back from a tough loss to countryman Stefer Rahardian by claiming victory over CMPC 2015 Fighter Of The Year, “Wolf of the Grasslands” Hexigetu. Local hero Radeem Rahman, the first Singaporean martial artist in ONE Championship, goes head-to-head with Canada’s Jeff Chan.

⚡ TOP SUBMISSIONS – JOSHUA PACIO & ALEX SILVA ⚡How will their ground games factor into the ONE: FIRE & FURY main event on 31 January?🗓: Manila | 31 January | ONE: FIRE & FURY🎟: Get your tickets 👉 http://bit.ly/ONEFNFtickets📱: Watch on the ONE Super App 👉 bit.ly/ONESuperApp 🏷: Shop official merchandise 👉 bit.ly/ONECShop

Posted by ONE Championship on Monday, January 20, 2020 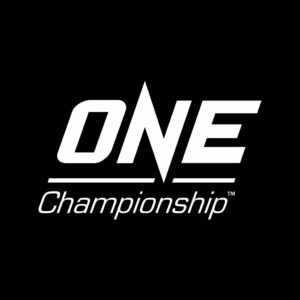